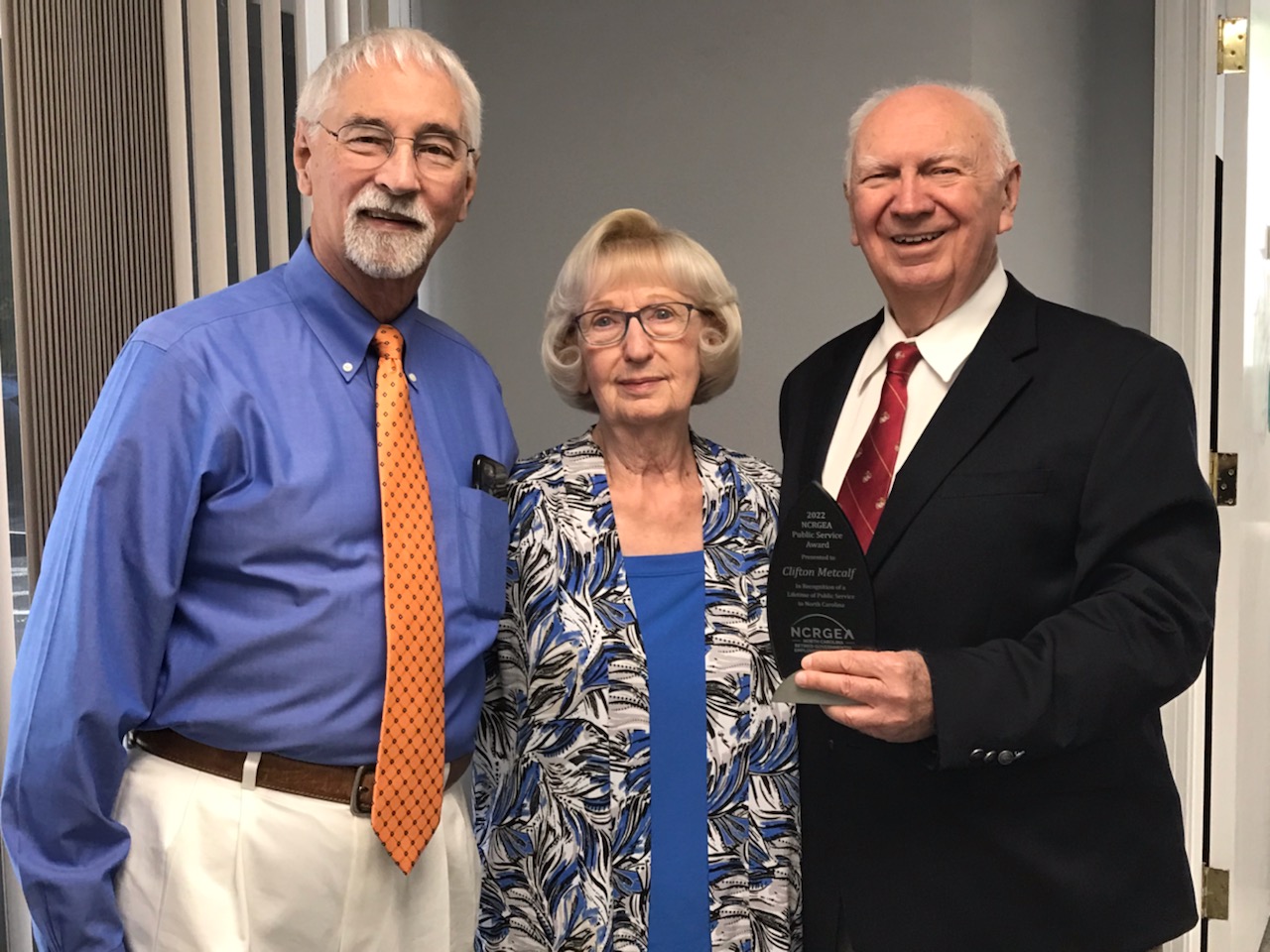 Clifton Blake Metcalf, of Lake Junaluska in District 1, was named the first recipient of NCRGEA’s Lifetime Public Service Award, which recognizes a retired government employee who has demonstrated excellence in public administration or service delivery and who made significant contributions as a career public servant in North Carolina.

The award was announced during the Celebration of Public Service Week on June 6, 2022. Dr. Dudley Flood, retired educator, and administrator in the North Carolina Department of Public Instruction, presented Metcalf with the award.

“Clifton Metcalf has committed his life to his family, church, community, state, and higher education for the people of North Carolina,” said Zeta Smith, the NCRGEA member who nominated him for the award.”He has lived a life defined by service.”

With a career spanning 52 years, Metcalf began working in the private sector as an Editor for The Mountaineer newspaper before moving into public higher education. There, he spent 23 years in service as a senior leader at various North Carolina institutions. His work included leading the news operations at the University of North Carolina at Chapel Hill, where he was later promoted to Associate Vice Chancellor for University Relations and Associate Vice President for State Government Affairs. At Western Carolina University, he served as the Vice-Chancellor for Advancement and External Affairs.

Metcalf has also lived a life committed to volunteerism. He was the founding president of Haywood County Schools Foundation, Inc. which provides scholarships and grants to students and staff of the school system. Appointed to various boards, such as the Haywood County Public Library Board of Trustees and the University of North Carolina Center for Public Television, he has also served in other leadership roles, including as a coach for the Waynesville Youth Association. As a coach, Metcalf built a reputation for equity and inclusion notable in the 1970s. One 9-year-old black boy, asked by an assistant coach why he wanted to be on the team, simply said, “Because everybody in my neighborhood knows Mr. Metcalf don’t care what color you are.”

Retirement did not slow down his volunteer efforts as Metcalf continued to build community and positively impact lives. Whether it was as a Board member for the Mountain Area Health Education Center of the UNC School of Medicine, NCRGEA’s Board of Directors, or as a church deacon, he remained active in giving back to others. This service resulted in him being recognized with multiple service awards, in addition to NCRGEA’s Lifetime Public Service Award.

“I was very blessed, over a period of many years, to have good teams to work with. One person can’t do it alone,” Metcalf stated upon receiving the award. “I’m very proud that the association is now recognizing that public spirit in North Carolina, and I hope the state will do the same. The people who work for North Carolina are the ones who keep the universities, the Department of Transportation, and other agencies going every day.”